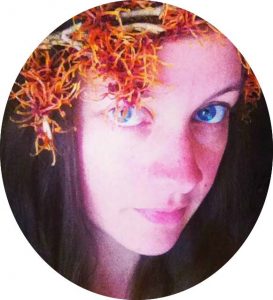 My name is Ruthie.

I study and practice the art of herbalism from my home in the wooded hills of southeastern Pennsylvania. I live in a cabin that is situated on the northern hem of my family’s 8th generation farm which occupies Lenape land.  My passion is to reconnect with and integrate traditional methods of healing into our modern lives. I am the sole proprietress of Mother Hylde’s Herbal (sometimes I enlist a garbling assistant), and have been studying folk and clinical herbalism since 2012. I am also a licensed massage therapist and have been practicing bodywork since 2005. 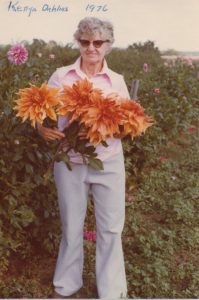 I began to feel the pull towards herbalism in 2009 after my grandmother passed away. My Nana, Miriam, lived on the farm with us and was responsible for a large, prolific truck patch that yielded produce and cut flowers. She occasionally makes an appearance in my writing because she continues to inspire me from beyond the veil. The day she passed, I was planting an evergreen sapling and vividly remember my movements going in slow motion. It was like being able to hear a different frequency for the first time or remembering a melody you haven’t heard in years. I was acutely aware of every detail of the roots and rocks, how the soil felt and smelled, and how I splayed the sapling’s roots out in the hole before I committed them to the Earth. As I patted the soil down around the sapling’s roots, it felt like a “coming home” to green things, as if this was my welcome to their world. I felt an immediate belonging to the green realm and a responsibility for stewardship. A pact had been made that day.

From there, I began casually reading well-known herbalists’ blogs. In 2013, I completed a year long foundational course in homestead herbalism taught by Susan Hess, who introduced me to the Pennsylvania Dutch traditions. I live near the heart of PA Dutch country (the local Wal Mart has a shed for horse and buggy parking), so learning about their traditions felt familiar and new at the same time. Words like electuary and galactagogue seemed to call out from down a long dark corridor; memories beckoning from deep in my cells. Medicine making seemed to come naturally to me and was immensely fulfilling, like my hands were performing a long-forgotten task. I spent the next few years consuming as much information as I could get my hands on from teachers like jim mcdonald, 7Song, Matthew Wood, Rosemary Gladstar, Kiva Rose, and Richo Cech. I read their blogs, watched their youtube videos, bought their books, signed up for their newsletters, went to lectures, and continued to make and grow medicine. But still, I hungered for a deeper relationship with the plants. 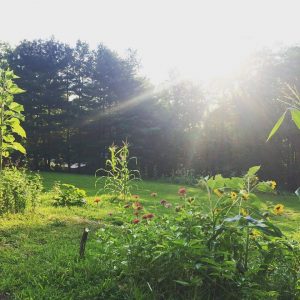 From May 2016 to April 2017 I immersed myself in the full-time study of functional herbalism as a distance student in Thomas Easley’s Eclectic School of Herbal Medicine. It almost didn’t happen, too. I was a week away from interviewing for a spot in another herbal program which by all accounts is an exceptional herb school, but it just wasn’t resonating with me. I wasn’t getting that inner “yes”, and as the interview date drew closer, the yes’s silence grew more deafening. I tried to ignore it (which we all know never ends well), and was just going to forge ahead, because it seemed to be the most logical option. Then one morning as I was scrolling through facebook (as we all do), a post for Thomas’s school all but jumped out of the screen with the “yes” I had been needing to hear. It was twice as expensive, four times as intense, over 7 hours away, and I had no idea how I was going to fit in being a full time student among my already full schedule as mom and massage therapist, but this school called to me in a way that others did not. The mountains of western North Carolina are already a heart home for me, so I was delighted at the thought of making trips to the school for workshops. Another coming home of sorts. At the culmination of the course, after 11 months of consuming lecture recordings, composing monographs, feverish note-taking, case writing, formulating, and five 7-hour drives down to the school, I received my certificate in Advanced Clinical Herbalism (now called “Functional Herbalism”) with the intent of starting my own practice in my community and building up my fledgling product line. So here I am as Mother Hylde’s Herbal. 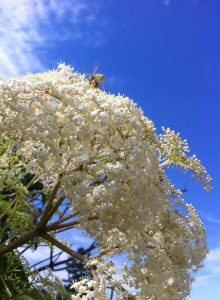 Mother Hylde’s Herbal serendipitously came about when I was searching for a name for my remedies and an identity in the vast and varied herbal community. Without really understanding all of her medicinal uses, the first herb I connected with was Elder. The protective arch of her boughs, how her creamy white umbels ripen to berries of the darkest purple, and the accessibility and generosity of her medicine all drew me in. She is largely responsible for setting my feet on the green path, so I lovingly refer to her as my mentor herb. I am also a child of summer by birth; a fiery Leo. There are so many things about summertime that enchant me- the extended daylight and the way it melts into dusk while fireflies rise out of the meadow grasses, the gardens ripening and swelling with abundance, the balmy heat and the extra curl it puts in my hair, and the 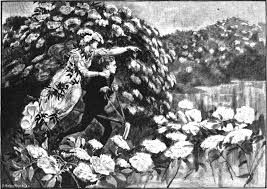 anticipation leading up to the fullness of solstice. Particularly, the connection between my mentor herb, solstice, and my heritage was a huge “a-ha!” moment for me. Many cultures and traditions (especially Scandinavian and Germanic) have a special reverence for this plant. The Elder is inhabited by the spirit of an old wise woman, and my Danish ancestors believed that if you stood under her protective boughs on 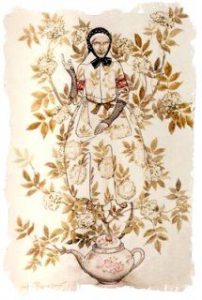 Midsummer Eve, the elder dryad would show you the King of Fairies. Much like the fairy trees of Celtic culture (usually a hawthorn, another one of my loves), it is bad luck to cut one down for fear of angering the woman who lived within.

The Danish author, Hans Christian Andersen, wrote a folk tale called The Little Elder-Tree Mother who emerged from a teapot and visited a boy in his fever dream. She showed him his future after he drank a tea of her flowers. This, of course, is a nod to the traditional and current day use of the flowers as a diaphoretic (opens the pores and drives heat from the center of the body out for the purpose of inducing a sweat and lowering body temperature).  I came to know about all this beautiful Elder lore in a roundabout way. When I was trying to think of an herbal business name for myself, I wanted it to reflect my love for Elder and my Danish heritage, so I looked up the word for “elder” in Dansk, which is “hylde “. Great!, I thought. It’s got an old-world sound to it. So, I put “mother” in front of it to give it a nurturing feel, having no idea at the time that there was a connection between the two. Some time later, I was reading one of Matthew Wood’s books and he speaks of the Hylde Moer.  I thought, “hold on, this is actually a thing ?!?!” Another trip to the googles revealed all of this lovely folklore, and I knew I had serendipitously chosen the right name. Or, she chose me, rather.

The Elder is a threshold tree. She thrives in hedges, next to woodland streams, in pastures, fens, and fencerows. She doesn’t mind wet feet and mottled sunlight, but can also flourish in full sun and clay-heavy soils. Left to her own devices, she can grow upwards of 20 feet tall and just as wide. When in bloom, she’ll make herself known to you from a hundred yards away, clear across a pasture, even from a moving car. Like hawthorn, she often occupies those wild and mysterious liminal spaces where transition takes place. She’s associated with making contact with the fairy folk, dreamtime, and otherworld. She is an intermediary between the human and the more-than-human realms. The Celts used her hollow branches to fashion 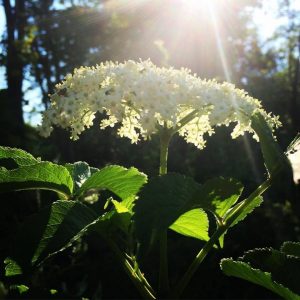 whistles which could communicate with souls on the other side of the veil.  Elder was so sacred to the Celts, that under early Irish law (Brehon Law), cutting down an elder was a punishable offense. The Pennsylvania Dutch call her “Frau Holle”, who also resides in a dream world at the bottom of a well. Plant an elder near the door of your home and Frau Holle will ward off evil spirits. Along with the Little Elder-Tree Mother, all of these incarnations have their roots in Scandinavian paganism where she was a goddess of high ranking. When the Christian church began to colonize Europe, pagan traditions suffered. Many of their rituals, spaces, symbols, and deities were whitewashed and assimilated to fit the new narrative, but the Elder Mother survives today in myth and story. She’s got one foot in this world and one foot in a much older, more primal place.

There is profound medicine in her narrative, and it’s with this spirit that I try to cultivate sanctuary here on the edge of things. If I’m being honest, there’s always been an edge-walker inside me. Even by my birth order, I’m the very definition of liminality. I’m the fourth and final girl born to a farmer right before the long-awaited boy came along. I’m the proverbial “black sheep” of the family; the free-thinking, rule-breaking minister’s daughter. In school, I stayed just on the outer edge of many social circles, able to flit in and out of the company of nerds, jocks, band kids, and art room rats, but still finding genuine connections in each setting. I stayed just loose enough to lean in when I wanted to and lean out when I needed the safety and comfort of the edge. From the edge, you can observe, be flexible, and be quiet enough to hear the voice of intuition. That’s kind of the way I approach herbalism and tending the Earth. Sit, observe, and listen…. to people and to plants.

Plant medicine is so much more than the reductionist way we’ve come to think about healing (take x remedy for y complaint). When we integrate myth and story into its use, plant medicine can fulfill a greater need within us. This means acknowledging body and spirit as inseparable and interdependent beings. Too often in medicine, they are addressed individually and almost never by the same practitioner as if the spirit can be winnowed away from its body in an overly intellectualized attempt at relieving symptoms. It’s that same hard, driven way of thinking that has divorced us from a certain level of presence in our bodies and it’s also prevented us from engaging in conversation with our ecological surroundings. I refuse to be complicit in a paradigm that preaches “conquer, colonize, and capitalize”, that treats our beloved Earth as a commodity and not a sentient, life giving being. I absolutely do not consent to being a cog in a machine that’s engineered to render us orphans of this planet, estrange us from our own bodies, and divest us of enchantment, ecstasy, and wonder. So my act of sedition is herbalism.

This sweet little beauty is now listed in my shop!

At long last, Oats + Roses is back in stock, bbs!!

My massage book is a little light this week (holle

Just finished these stays for @selkie_sanctuary an