This box was so much fun to create!  I was getting ideas for it while making the Mabon Box and couldn’t wait to put it together.  I went back and forth about whether to call it Samhain or Samhuinn.  The latter is the Scots Gaelic spelling (and that’s what I’m partial to), but the former is more widely recognizable, so I went with that.  Maybe next year, I’ll go with Samhuinn.

The herbs gathered in this box are to help you honor those who have come before.  “Samhain” means “summer’s end”, and is pronounced “sow-when”. It’s the beginning of the dark half of the year, and daylight will continue to dwindle until Yule. The Cailleach, or sacred hag, rules from now until Beltane. She is Beira, Queen of Winter, Wise Woman, Maker of Mountains, Huntress of Deer, and Keeper of Stones. She can summon winter storms and cast a frost upon the land with one thump of her staff. Samhain is the third and final harvest on the wheel of the year. By the end of October, all the crops are brought in, and this was traditionally the time of year for harvesting livestock. Before becoming more agrarian, the ancient Celts were more of a pastoral people and depended on keeping their herds on good pasture. By summer’s end, they brought their herds home and any that they couldn’t feed over winter were slaughtered to stock the larder. The Samhain bonfire (“bone-fire”) was ignited to burn the bones of the animals that were culled. Each family would smoor the fire in their own hearth and carry a torch home from the Samhain bonfire to reignite it. This symbolic act reminds us that death precedes new beginnings.  Samhain was the start of a new year, as the year was generally divided into the dark half and the light half.

Humans and plants alike are storing food for the coming season. Root vegetables like carrots, turnips, beets, and burdock are storing up their dense nutrients underground. Trees are sending their sap-blood rootward. Fields are barren and Earth seems to have gone to sleep. The green world is retreating back underground by way of the vast, unseen network of roots. Earth is calling her children home to rest in the dark, creative womb of the goddess. Our physical and mental activities also turn their focus inward in harmony with the turning of the wheel. It’s in these dark, damp, hidden places where deep nourishment takes place.

Death in the physical realm turns our minds to our ancestors and loved ones who have come and gone before us. What wisdom can be gleaned from tuning in to their voices? What mysteries lie beneath the hollow hills? This is a particularly auspicious time, in that the veil between our world and theirs is at its thinnest. Things that have been lurking at the edge of our consciousness bring themselves into our field of awareness. We are reminded now that the boundaries of our earthly selves stretch well below the surface where our collective roots intertwine. 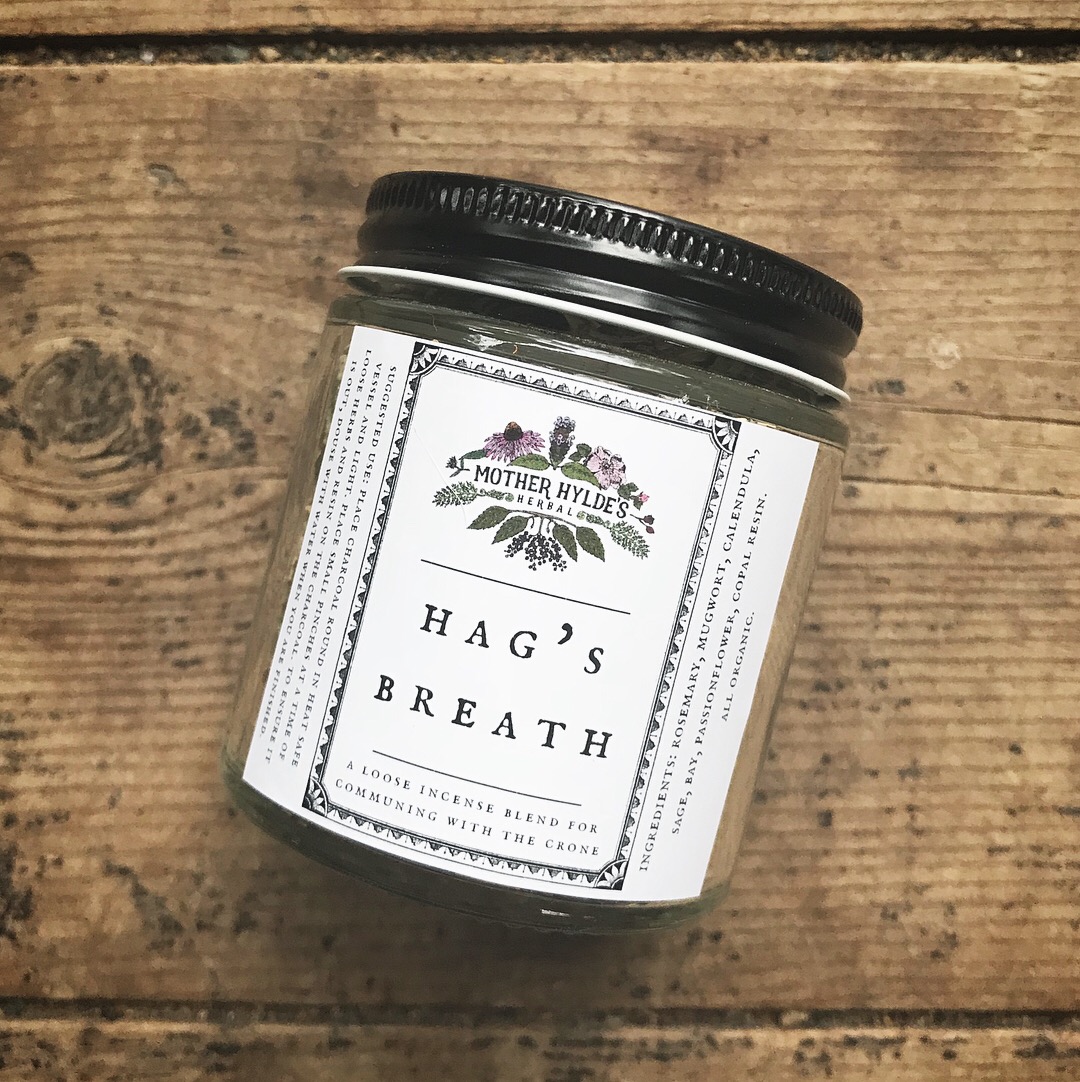 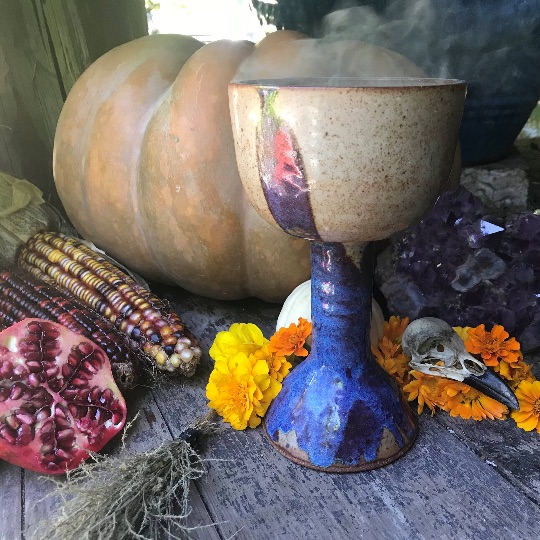 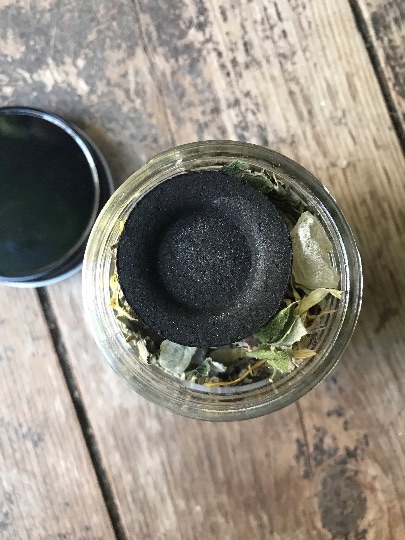 Each jar included a quick-light charcoal round

➕ Hag’s Breath Incense Blend- A blend of loose herbs and resins for communing with the crone, the hag, the cailleach. Comes in a 4oz jar with a quick-light charcoal round that smolders for about an hour. Rosemary, mugwort, calendula, sage, bay, passionflower, copal. 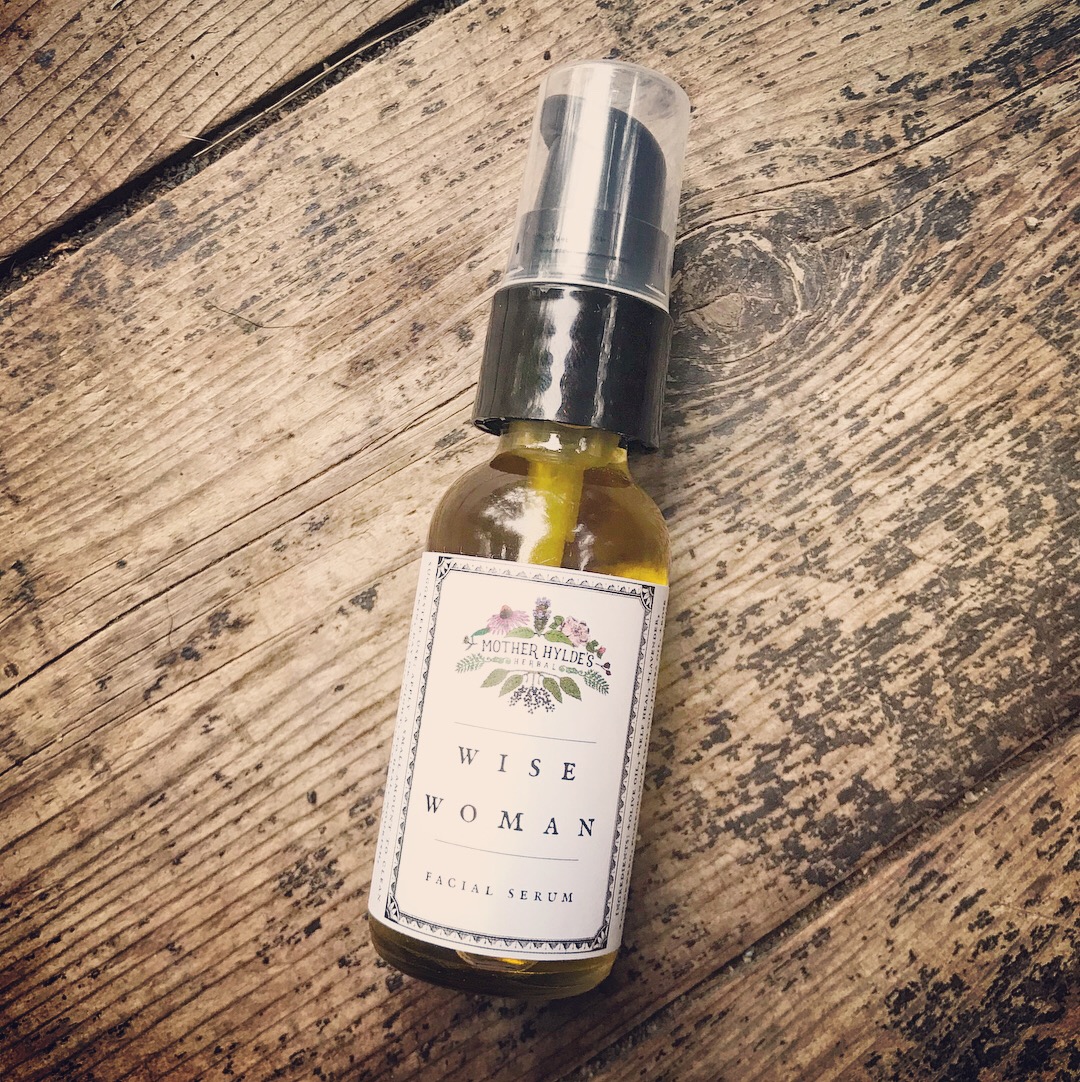 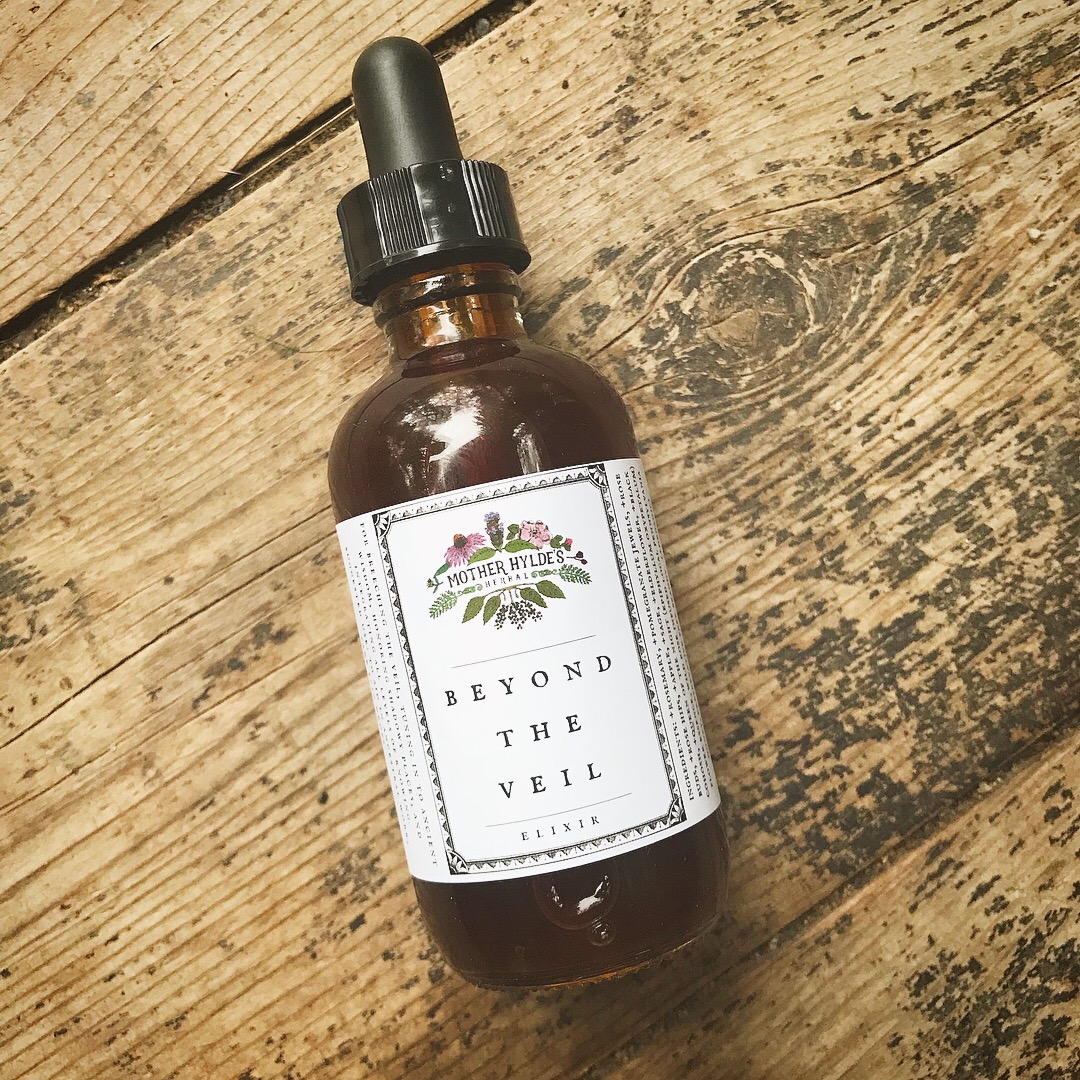 ➕ Beyond the Veil Elixir- heavy on the rosemary because it helps us to remember the ancestors and increases blood flow to and from the head. Pomegranate jewels as a nod to Persephone and her descent into the underworld where she stays every winter until she re-emerges in springtime. Apples are associated with immortality and the undying lands of Avalon in Celtic lore, and is one of the sacred trees in the Ogham alphabet. Queen of the Night flower essence- if you desire the privilege of witnessing her beauty and intoxicating scent, you have to be willing to sit patiently in darkness, for she blooms but one night a year. Black cohosh to integrate all your levels of perception. Rose and rose hips for the forbidden rose that Janet picks from the woods of Carterhaugh which sparks her affair with Tam Lin. Sage because it is synonymous with wisdom, and I think of sage as healing to our throats, which is the seat of our voice. Our throats are also the bridge between heart and head, giving voice to what passes between. Elderflower for the wise woman (Frau Holle, Hylde Mor, the Elder Mother) who dwells in the elder tree. She can escort you to and from dreamworld and show you things yet unseen about your life. She is also a portal to the world of fae. Taken medicinally, she “opens the tubes of the body”, and drives things to the surface that have taken root deep within. I believe this also speaks to her energetic medicine. 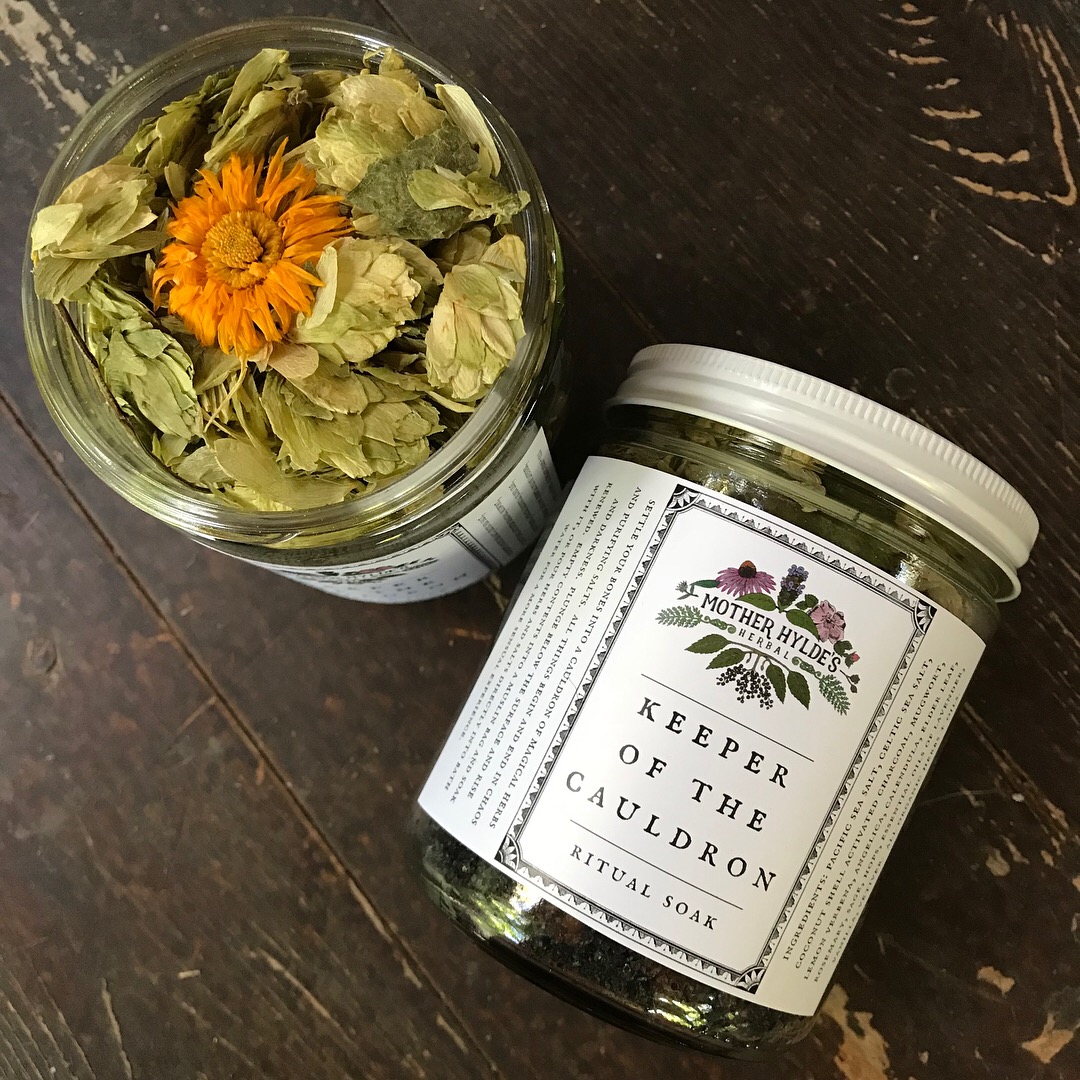 ➕ Keeper of the Cauldron Ritual Soak- a blend of herbs, salts, and oils for a sensual soaking experience. Here’s what comes in each 16oz jar: Pacific sea salt, Celtic sea salt, activated coconut shell charcoal (to make it black!), essential oils of lavender, vanilla, and vetiver, dried mugwort (a magical dreaming herb), lemon verbena (can give you flying dreams!), angelica, calendula, elder leaf (the Elder Mother is an emissary from the Otherworld), rosemary (for remembering our ancestors), sage, and hops (reeelllaaaxxxx….) Each ritual soak comes with a muslin bag that you can use as a giant tea bag in your tub, or you can dump the entire jar in your bath water so you can see and feel and touch all the herbs (which is what I like to do!). The charcoal turns the water black-ish and makes you feel like you’re in a giant cauldron. “Keeper of the Cauldron” is a phrase from Sharon Blackie’s telling of Cerridwen’s tale (you really must read “If Women Rose Rooted”). Cauldrons are symbolic of the womb, where all life begins. The wombs of our mothers, the womb of the Earth, and places we retreat to when we need to reinvent ourselves. All things begin and end in chaos and darkness, and Samhain is seen as the end of one year and the beginning of another, which is why we associate the symbol of the cauldron with this time. The darkness and safety of a cauldron is deeply transformative: what goes into it emerges a new being. Plunge below the surface and rise renewed. 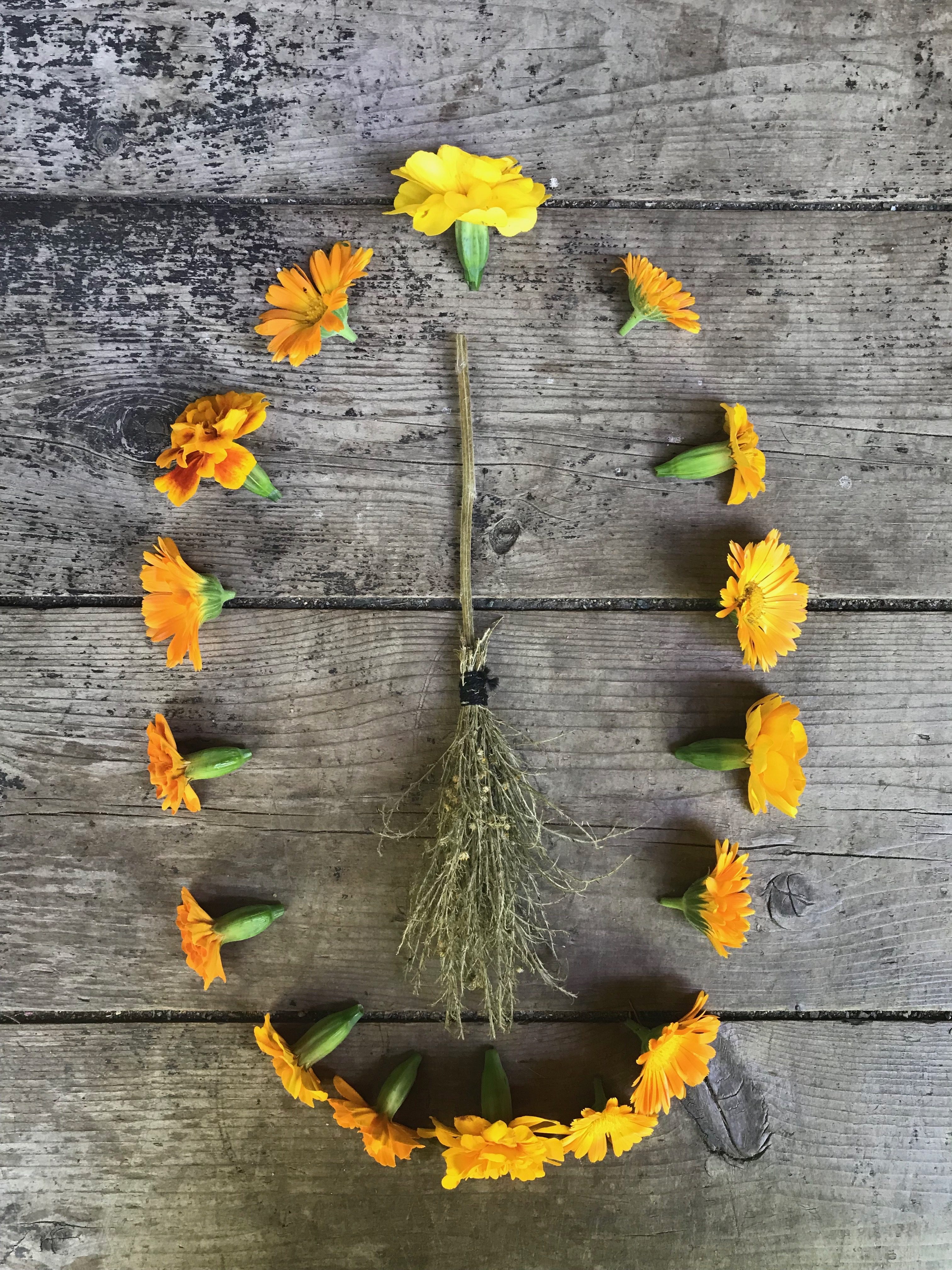 ➕ Wee Besom- Brooms are famously associated with witch’s flight and flying ointments. They are sometimes used in handfasting ceremonies, and of course for sweeping. Just like the one in the photo, these are handcrafted from yarrow stalks (yarrow sets and protects boundaries), and goldenrod stems as the bristles. Goldenrod is used energetically to help you stand strong in your truth without fear of societal judgement. Perfectly sized for your Samhain altar, a little sweep of it is good energy hygiene for your ritual space. Interesting to note here that a “wee besom” is also Scots slang for “a cheeky lass” (a woman not afraid to speak her mind, perhaps?) 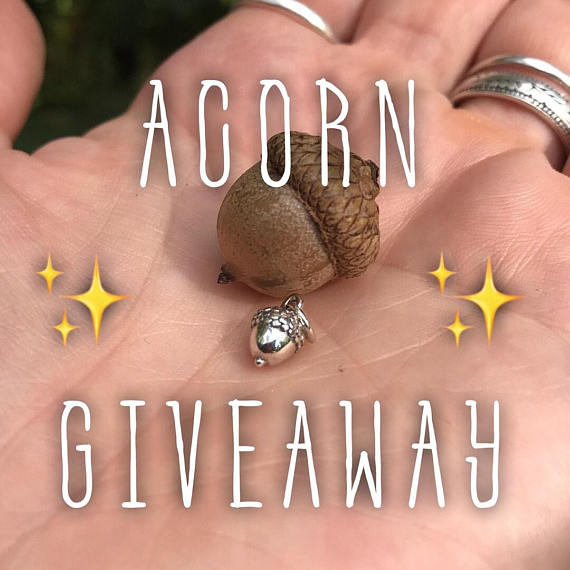 ***This box had a special giveaway in it.  I chose one person to receive a tiny silver acorn charm in their box.  Acorns mean many things to many cultures. When you hold an acorn, you could be holding the beginnings of an ancient being. Oak is also sacred to the Celts, earning a spot in the Ogham alphabet as the letter “duir”, which is where our word for “door” came from. This is suggestive of oak being a threshold tree, standing between two places, or two planes of existence. In a recent journey, oak held me in his protective branches where I could oversee the entire forest and gave me a safe place to be my true self. In many traditions, oak is the archetypal Tree of Life, with its deep roots and regal canopy. Oak groves were known to be sacred spaces for ceremony and ritual for Druids, together with the ash and thorn (hawthorn). You often find the triad oak, ash, and thorn mentioned together in literature referring to the Druid’s most sacred trees. It’s believed that the word Druid came from “duir”, and meant “those with knowledge of the oaks”. I’ve also read that during the Burning Times, wise women and healers would use the acorn as a secret symbol to identify themselves to avoid being accused of witchcraft (which of course is my favorite little bit of acorn lore, and which is why I wear acorn(s) myself).

If I ever have extras, I list them in the shop individually after the boxes have all gone out.  Visit my apothecary to see what I’ve got!